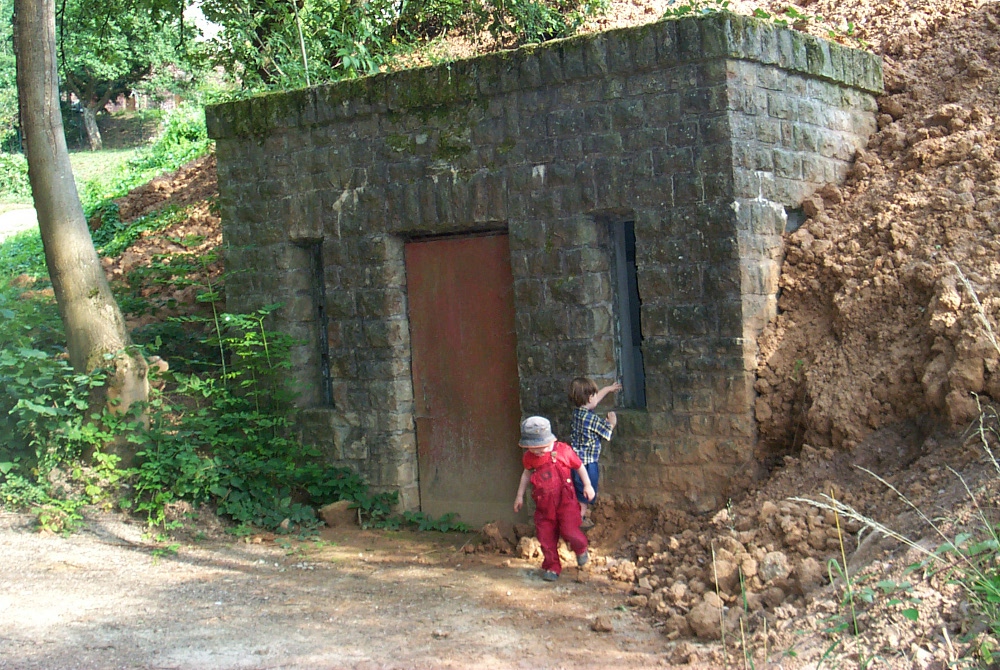 The well at this point had probably been used for a long time to supply the farm with water. The fountain house, which is still visible today, was built in 1938 as part of the Limes programme and was mainly used to supply water to a medical bunker, which was located in the area of today's playground at the museum entrance and was blown up and buried after the end of the war. However, it was also used to supply water to a large number of bunkers, some of which are still partially preserved. Translated with www.DeepL.com/Translator (free version).

Directly below the museum there are 3 remarkable bunkers:

A well preserved and quickly accessible bunker complex that is situated in a steep terrain is located at the small street from Karthaus up to the museum. It is best to park in the road bend at E 6.59787 N 49.70957. Downhill, one climbs over the guard rail next to a street lantern and after a few more metres one stands next to the bunker roof. Coordinates: E 6.59783 N 49.70693 Left of the roof you can climb down to the former entrance. CAUTION: Very steep terrain. Do not enter the bunker itself because of danger of collapse and injury - only look at it from the outside.

In the course of the Westwall construction 156 bunkers were built in Konz alone. At least the remains of about half of them are still preserved. In the city centre of Konz and in the district of Berensborn there are several bunkers, some of which are in very good condition: they are located on private land in gardens or are built over and not open to the public. There are many ruins in the Konzer Tälchen and at the Wiltinger Kupp.

ENTERING THE BUNKERS IS LIFE-THREATENING. Please only look and also look out for holes etc. in the surrounding area.