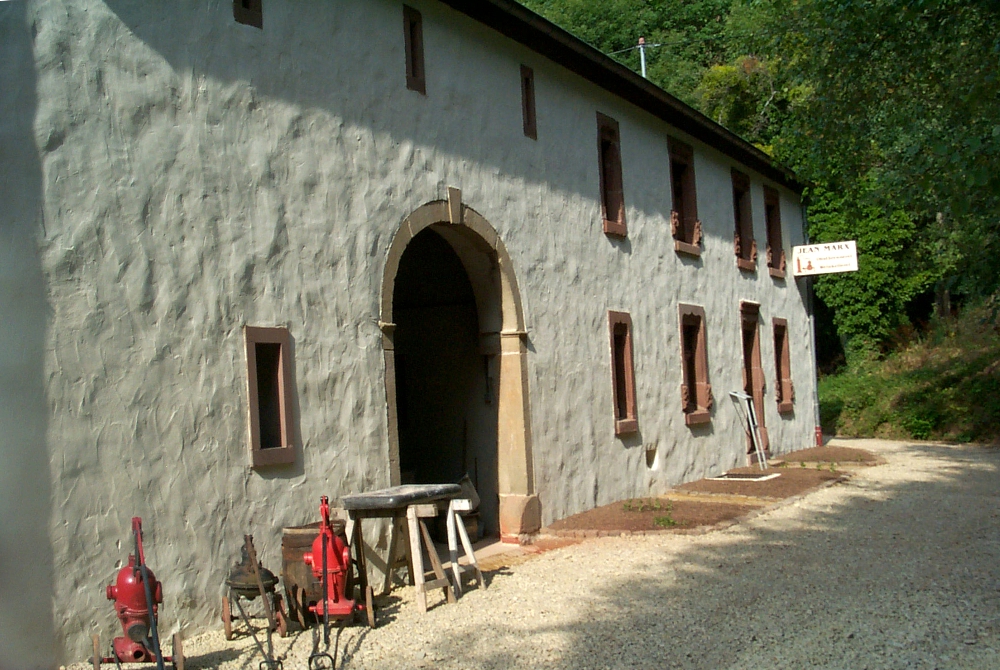 The building was built as a copy of a big farm in Köllig in the Saargau, and, once finished, is to house a room for the caretaker and the cowstalls for future museum cattle. The latter is the main reason why the museum decided to copy a building. A historical building would be too strongly affected by the manure and the emanations from the animals. Using a historical building as a residence would also lead to excessive wear of the building in the long run.

This type of house is found in the Trier region and also in neighbouring Luxembourg and Lorraine in all sizes and designs. In the Saargau, the region of low mountains between the Saar and the Upper Moselle, they were of an imposing size. Rich soil and inheritance laws which prevented the splitting up of property have led to many imposing buildings being maintained until the present day.

Even the front with five axes indicates that this was an unusually spacious and impressive building.

It has a barrel vaulted centre passageway and a vaulted kitchen, from which we can surmise that the building originated in the 18th century.

The house was surveyed in all details in 1987 and later a copy was built at a suitable spot on the museum grounds. One difficulty was trying to find suitable door and window splays. The museum did have an impressive collection of old cut stones from various demolished houses, but

These were only enough for the splays for the two barn doors.

A tip from the district administration in Trier-Saarburg helped to procure suitable splays from a very regrettable demolition of one of the loveliest houses in the Saargau, in Dittlingen near Merzkirchen. Some of the missing stones were then supplied by a stonemason in Konz in accordance with the documents available. 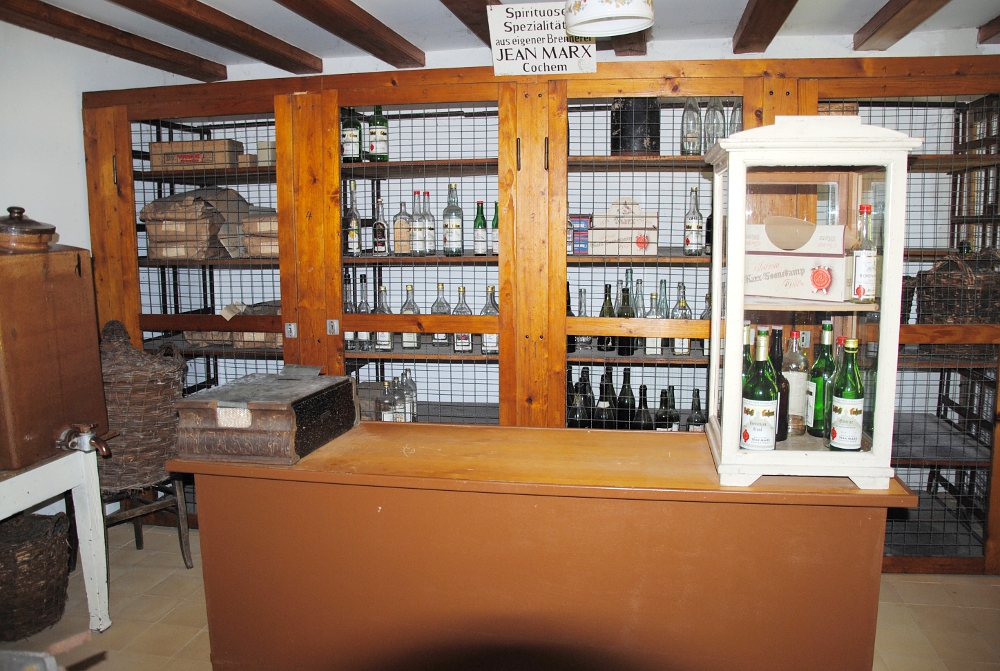 A shed, which was dismantled in 1999 in Kahren near Saarburg, was built onto the northeast gable wall of the building. What is special about this shed is its covering of convex and concave tiles. This type of roof is typical for farmhouses in Lorraine, it was seen as far north as the Saargau in some cases. The northernmost example is to be found in Wincheringen on the Upper Moselle.

The roof tiles used here are not handcrafted but are Dutch made, probably from the 30s. They have a tip for attaching, which was clamped behind the roof batten.

The top storey of the Saargau building houses an apartment where a member of the museum staff has already moved in. Apart from looking after the kitchen garden this member of staff also takes care of light repair jobs and caretaking tasks and is also to be in charge of keeping the livestock in the stables later on. On the lower floor next to a kitchen and a sitting room (opened in 2006) is the distillery from the firm of Jean Marx from Cochem, founded in 1881.

The firm was engaged in wine-growing, operated a distillery and ran a wine merchants'. As a distiller it supplied not only private customers but also wholesale customers like hotels etc. Earlier the wines and spirits were first shipped in tuns, then so-called "wicker bottles", willow baskets lined with straw, into which the demijohns were fitted. Later on when production of wicker bottles became too expensive, plastic containers wrapped in cardboard were used for shipping. The containers were despatched as was usual in those times as general cargo by rail freight.

Apart from the product assortment typical for a distillery in a wine and fruit-growing region, such as wine marc (Weintrester), Weinhefebrand (a spirit drink produced from lees of wine), and various fruit schnapps, the Marx distillery had specialised in the production of Boonekamp. This involves production of bitters according to a recipe, which is kept a closely guarded secret by each manufacturer, from a decoction of herbs and alcohol. These bitters were put on the market in the typical small bottles under the registered trademark of "Burg Cochem, Marx Boonekamp". The bottling line for two Boonekamp bottles each can be admired in our museum. 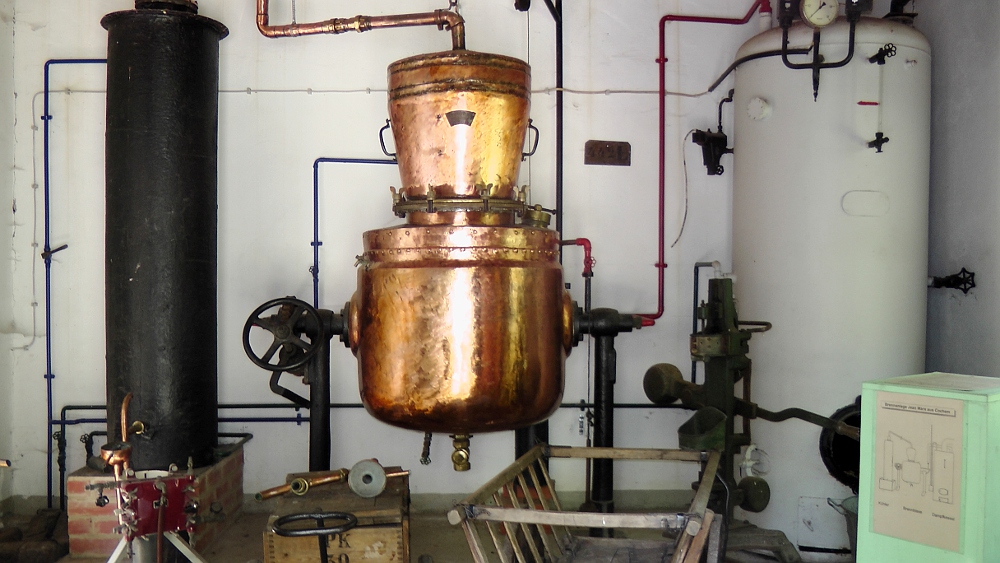 After distillery operations ceased in 2002 and the site of the distillery had to be moved due to customs and excise regulations it arrived at the Roscheider Hof open air museum.

The fruit distillery was a so-called "Abfindungsbrennerei". These "settlement" distilleries are not licensed by the customs and excise authority as opposed to licensed distilleries. Only the extraction of a certain amount of spirits from precisely specified raw materials is permitted in an operating year in a settlement distillery. Tax must be paid on this yield or it can be sold to the Federal Monopoly for Spirits Regulation at a fixed and subsidised price (settlement). The amount of alcohol that is in excess of the fixed yield is the distiller's actual profit. Another explanation of settlement or "Abfindung" is that the distiller has to settle with or put up with things, even if the yield is less than expected.

The distillery complex in the Saargau farmhouse consists of three rooms: the distillery, a room for preparation and the sales room. The distillery, which is housed in an outbuilding belonging to the Saargau farmhouse, is made up of a boiler, still and cooler. The bottles were finished ready for sale in the preparation room with the Boonenkamp filling line, labels cabinet, laboratory equipment etc, in order to be presented to the customers in the sales room with a large wall unit, counter, packing materials etc.