Garden belonging to the Saargau house

The garden of the Trier house was planted during 2000/2001 as part of the international "Gardens without frontiers" project. It is bordered with plastered stone walls, the pillars of which have gratings.

For us folklorists the water supply in times gone by is a not insignificant subject. From time immemorial people have had to go to great endeavours to obtain this precious liquid.What is the Lambach pump? - A reciprocating pump, where a large float moved by stream water fed into it drives a plunger into a cylinder above it, which pumps the spring water through a discharge line into an elevated tank.

The school toilet from Portz 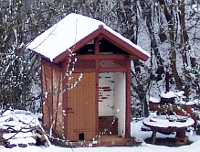 The well at this point had probably been used for a long time to supply the farm with water. The fountain house, which is still visible today, was built in 1938 as part of the Limes programme and was mainly used to supply water to a medical bunker, which was located in the area of today's playground at the museum entrance and was blown up and buried after the end of the war. However, it was also used to supply water to a large number of bunkers, some of which are still partially preserved. Translated with www.DeepL.com/Translator (free version).

History of the house
The house was originally located in Obermenning, about 5 kilometers beeline south of the museum in the so called „Konzer Tälchen“ In the masonry of the building the number 1834 was found, which probably hints at the the year of its construction.

The freight shed from Konz

Because of the increased freight traffic, two goods sheds were built at the Konz station in 1888. The first one was constructed next to the main building and can now be viewed in the open-air museum. The other one was constructed across from the main building and was later used by the company Prenzel. Eventually, it was demolished due to a war damage. 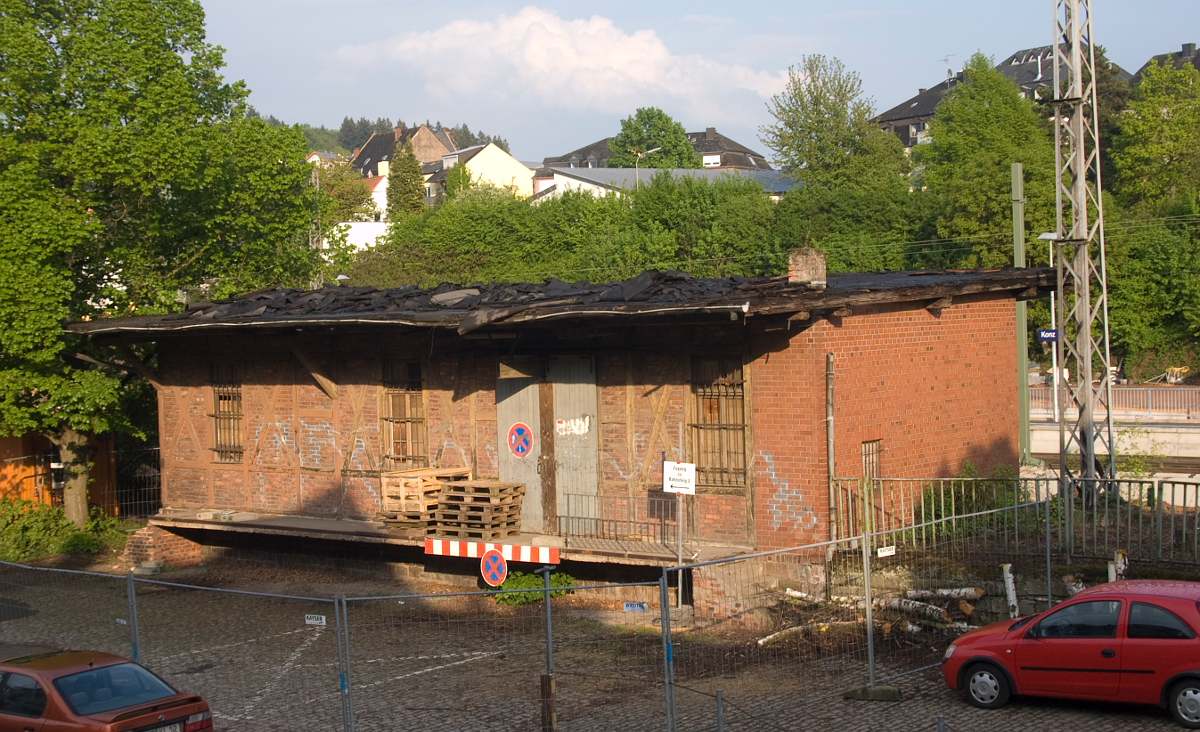 The shed that was now transferred to the open-air museum was also damaged by artillery fire of the US Army, coming from Luxemburg as from September 1944. These datings coincide with the findings that were discovered during the demolition of the building. On one of the tracks, the dating 1882 was found. Consequently, the shed must have beed built later on.

Nearly all of the consignments of Konz-based companies such as Zettelmeyer or KU AG were processed via this warehouse. One story made the goods shed famous after it was published in the „Bildzeitung“. A wanted criminal from Berlin had himself locked in a box and sent to Konz. One forwarder noticed an irregularity and opened the box. The criminal made a getaway.

The shed in the open-air museum will include an exhibition room where the transportation und transshipment of goods in the years 1900-1960 will be shown. On trackside, a piece of track will be reconstructed in order to place a freight wagon on it.