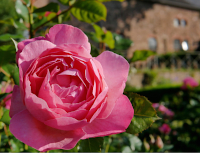 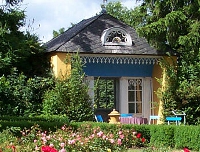 The herb garden in the Roscheider Hof contains over 100 species of plants, which have played an important role from the Middle Ages right up until the present day as herbs for medicinal, culinary or magical purposes, and still do.

Our woodland theatre offers space for 100 spectators. It is located in the museum building, but can also be used separately through its own entrance if required. The wooldland theatre can also be rented for cultural events.

The plum garden lies below the rose garden and surrounds the half-timbered chapel from Bürder. In addition to some old plum trees from the time of the estate, there are many trees newly planted in the 2nd half of the 2010s. by crop rotation farming, root crops were increasingly cultivated and soil quality was improved by fertilisation.

The chapel dates from around 1730 and is from Bürder, a few kilometres north of Neuwied. It was kindly donated by the diocese of Trier, as it had to make way for a newly built church. Bürder is however on the right bank of the Rhine and is thus strictly speaking outside the area for the open air museum. The museum was then faced with a dilemma, as no doubt other open air museums have been:

D7a Graveyard by the chapel from Bürder

Around the chapel from Brüder a replica of a small graveyard has been made, where there are gravestones from three different centuries. The museum was given some gravestones, others turned up when houses were dismantled, where they had obviously been 'recycled'.

Read more: D7a Graveyard by the chapel from Bürder 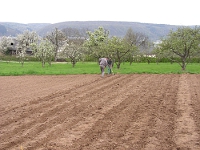 History:
The three-field economy practised for centuries was replaced by crop rotation, root crops were increasingly cultivated and soil quality was improved by fertilisation.

Fruit meadows have become rare. In the past, they were like belts around the settlements and provided their inhabitants with fruit that was not only eaten fresh for generations, but also preserved for the winter by drying and preserving.

Reichsarbeitsdienst shed of type RL IV. The barrack was stored in the Eifel from the end of the war until its reconstruction in 2017 and, according to oral tradition, was used as a control centre for a V1 launching facility.

Directly opposite the Reichsarbeitsdienst barracks, the English counterpart, a so-called Nissen hut, has been standing since spring 2021.