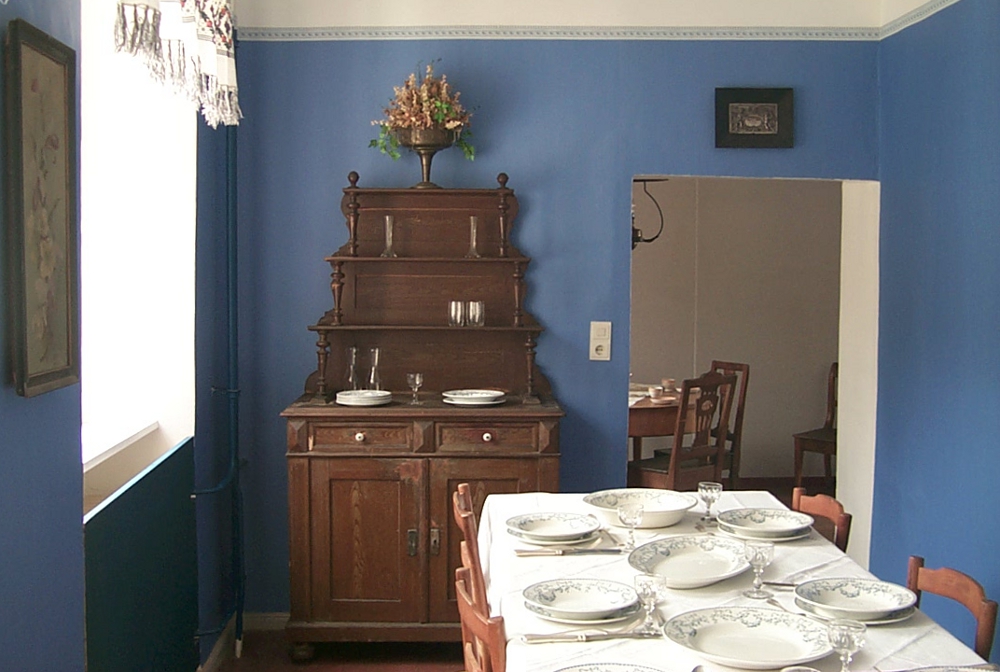 The first room shows a parlour from the period around 1840 with the table set for afternoon coffee. The period following the empire is marked by modest middle class lifestyle and deliberate simplicity.
Domesticity, companionship in the family and one's circle of friends is expressed in the furniture of this time too. The furniture is provided with restrained ornamentation and lays greater emphasis on effects gained from the marked grain of the wood. In the early Biedermeier period pale woods such as pear wood, birch or cherry were preferred. In the 50s and 60s darker types of woods such as walnut and mahogany were also introduced.

Apart from the grandfather clock and sewing tables the semi-circular console tables, so-called "demi-lunes”, which were pushed together to form a round table, set the tone for the room. The table is laid with a coffee cloth. This narrow table runner prevents the cups, still without handles at this time, from wetting the table surface and leaving marks on the polish, which was susceptible to damp. Saucers were not in common use for coffee cups in the Biedermeier period. Dining room in "neo-Biedermeier" (about 1910)

The Biedermeier style was revived in furniture design from about 1900 on as a somewhat more severe variation of art nouveau. This development was started by artists like Franz von Stuck and Peter Behrends. In contrast to the Biedermeier period of the 19th century, now industrially manufactured products were available, which a greater number of people had access to. Seats of the chairs made from bentwood gave an impression of expensive inlay work, while they had merely been stained using stencils. The wallpaper of the room also lends an appearance of costly silk wall covering, although they have just been printed with a type of woven pattern. Even the ceramic crockery on the table is not decorated by hand painting as in the Biedermeier period, but with the copper transfer process, in widespread use since the mid-19th century.

Furthermore spruce was used frequently - as with the dresser on display - and given the appearance of high-grade woods with a veined coating of paint on a linseed oil base.