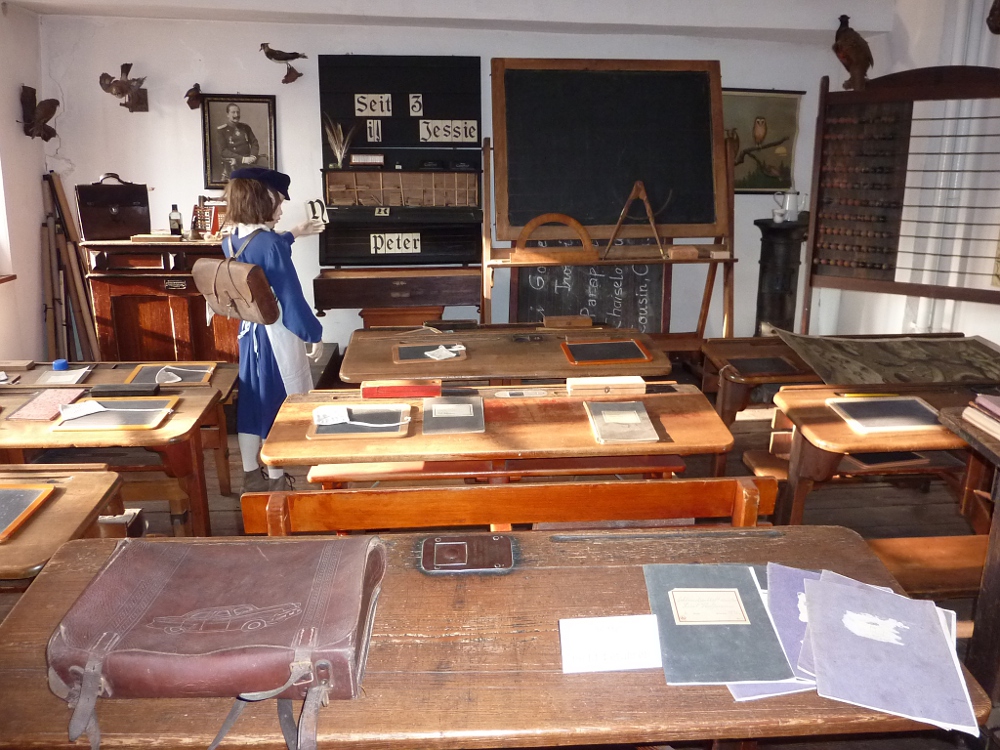 Wooden benches arranged in even rows, blackboard rags tied to the slates, and a slightly raised desk in front of the class - this is how a classroom looked during the Empire. The raised desk already gives some indication: The teacher was at the centre of the lesson. He not only taught the children, he brought them up. His most important tool was the big, movable slate blackboard. But the calculator with the wooden balls was very useful. However what fascinated the children most were the coloured pictures on the wall, which the teacher would hang up depending on the subject. They had brought the big, wide world into the classroom from about 1890 on.

Usually schools in the country had only one class, where the village children were taught by one teacher only, from the first year of schooling to the eighth. This meant the schoolroom was often bursting at the seams. The guiding figure for class size was 60 pupils, but often there were up to 100 children sitting on the benches. It is therefore understandable if lessons seemed much of a muchness: The teacher presented the material, the pupils learnt it by repeating it and copying it down. Apart from reading, writing and arithmetic, music and religion were very important subjects in the schools of the Empire. Not only were hymns practised in music lessons, but also patriotic songs which were sung on high holidays such as the Emperor's birthday. Physical exercise was considered part of the school's contribution to pre-military training, and this is why only boys had it. They had to line up in pairs and practice marching on the teacher's orders. Girls had handiwork lessons at the same time. They usually crocheted, knitted and darned, but also cooking, baking and preserving were on the timetable.

Religious instruction was usually given by the pastors. A difference was made between history of the bible and the "Catechism". But beyond religious instruction the church had a great influence on school life. Educating the children to be good Christians was the goal and in order to achieve this the village youth was subjected to the authority of the pastor and teacher not only in school. Whoever was caught pinching apples in the afternoon or seen out on the streets late, or whoever did not attend mass before school, was punished with the cane. School was supposed to instil discipline and good upbringing was more important than education.