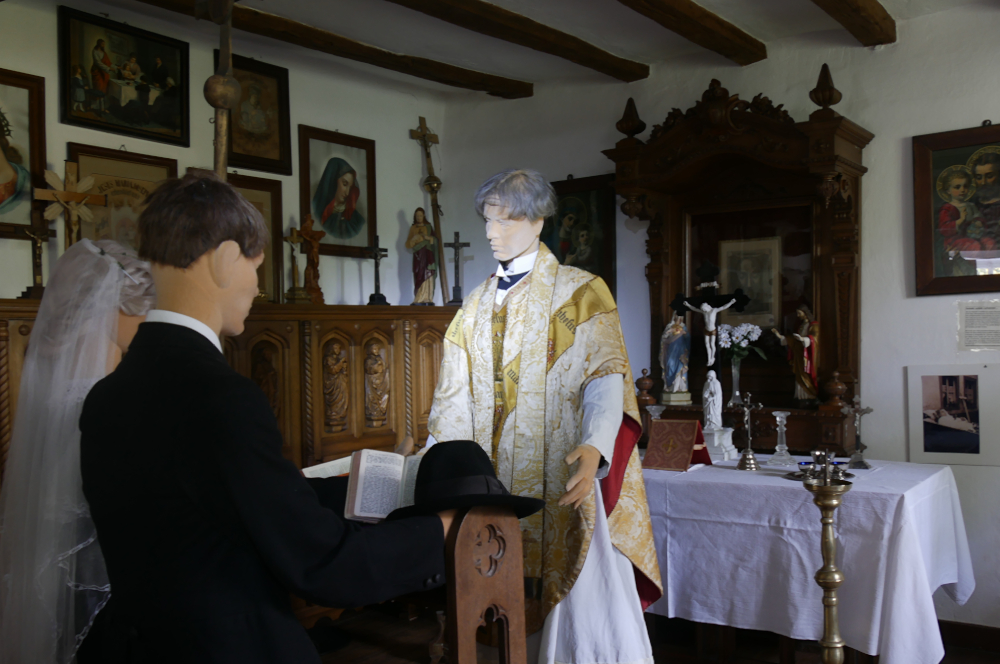 The topic in the room Piety among the people in the shadow of the Trier cathedral illustrates how important religious life was particularly in the Trier diocese.


The dioceses of Metz, Toul and Verdun also belonged to the archbishopric of Trier until the Peace of Westphalia in 1648. Many Trier cloisters were wealthy beyond the borders of Lorraine and Luxembourg. Religious life played a dominant role particularly in the country until far into the 20th century. Birth and christening, first communion, marriage, death and funeral were the great turning points in the life of a person, which were celebrated accordingly. In between, the highlights of the year were according to the church calendar.

Until the 1920s the bride and groom got married in black. Black was considered a festive colour. At the most the bride's veil could be white.

The beliefs of the rural population mixed for a long time magical ideas, superstitions and practices stemming from the world they lived in with religious ideas. Although there are very few objects left from this, this means all the more importance is attached to those surviving. The white kitchen door from Konz-Niedermennig, which can be seen at the start of the exhibition, is a very good example of this. It was provided with two waxen crosses which were later painted over again and again. Wax crosses such as this were often attached to front and inside doors at Candlemas (2nd February) to keep away evil spirits. Other practices such as sprinkling the hide of cattle with blessed wax are also known.

Saints were in particular considered God's intercessors in times of trouble. The fourteen auxiliary saints, shown in a window from the Auxiliary Saints' Chapel in Lampaden, provide eloquent witness to this. Each of these 14 saints was invoked upon a special occasion. Saint George helped with insults or danger of war, Saint Blasius with sore throats and children's illness, Saint Erasmus with cattle disease and epidemics, Pantaleon with headaches, Saint Vitus with epilepsy, Christophorus with death, thunderstorms and hail, Dyonisus with headaches, Cyriacus against evil spirits and temptation, Achatius with fear of dying, Aegidius with infertility, Margarete with difficult births, Saint Barbara gave help to the dying and Saint Catharina helped those with stammers and headaches.

Saints were always represented with objects typical for them, their attributes, so that they could also be recognised by people who could not read and write. Thus St. Ottilie, founder of a cloister and patron saint of Alsace could be recognised as carrying two eyes in a bowl. She had been born blind and did not gain sight until she was christened at the age of twelve.

As can be recognised by the number of Sacred Heart figures kept until today, the Sacred Heart movement became a mass movement in Catholicism in the second half of the 19th century, which penetrated rural communities above all, right down to everyday life. Sacred Heart fraternities were founded everywhere for the male population on the initiative of local clergy and fraternities of the Blessed and Immaculate Sacred Heart of Maria for women and children.