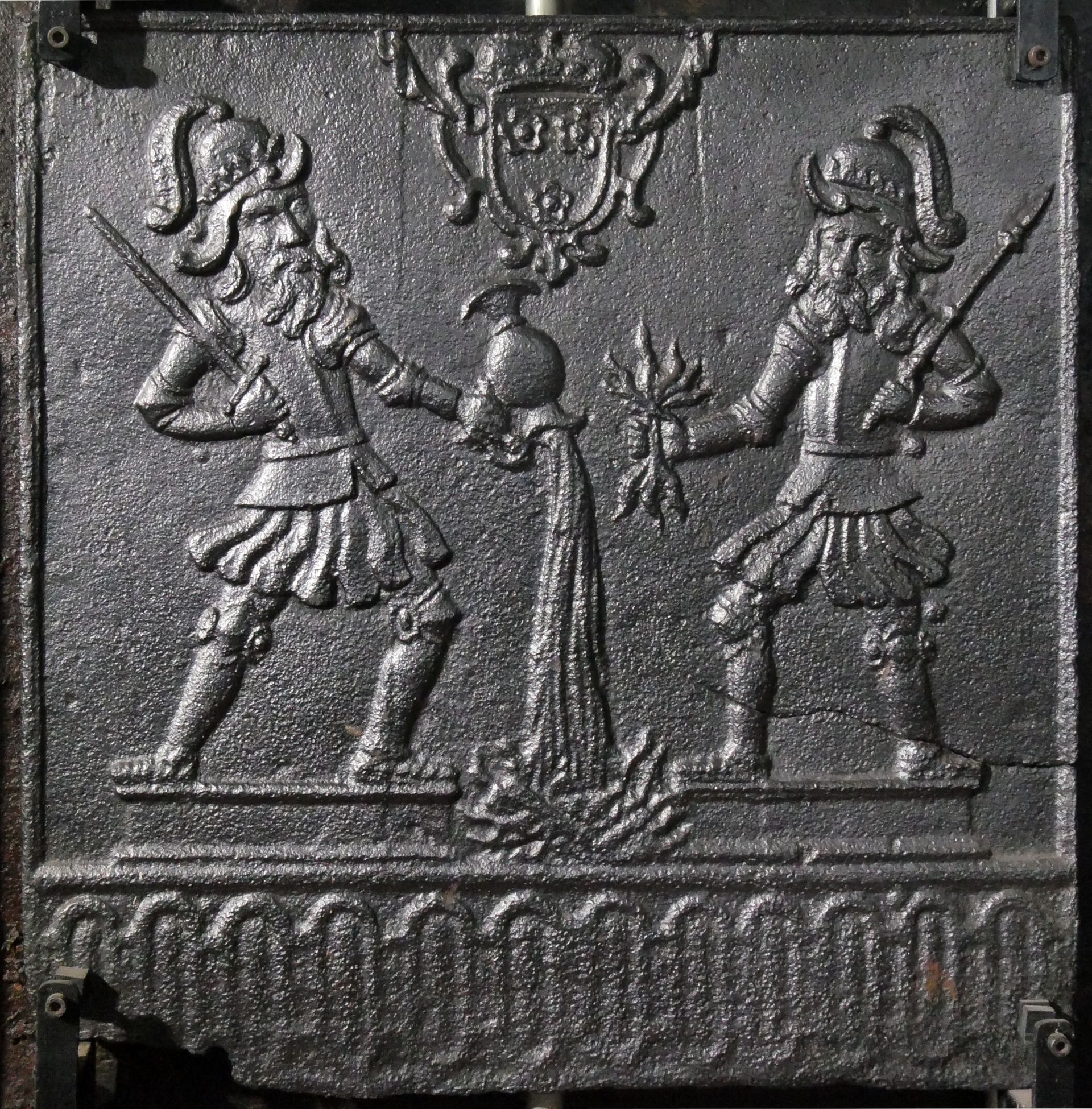 Cast iron objects are one of the focal points of the museum's collection. The larger items collected were mainly kitchen cookers, heating cookers as well as taken, fireplace and stove plates. Most of the exhibits were made by the local iron industry, especially the smelters in Trier-Quindt, Weilerbach, Einschmitt and in Saarland. Others came from what is now Schleswig-Holstein, Denmark or the French Jura.

In the former horse stable of the Roscheider Hof, there is an exhibition of cast-iron stoves as well as Taken- fireplace and stove plates. Taken plates are cast-iron plates that used to be bricked into a recess in the fire wall between the kitchen and the parlour in farmhouses. They absorbed the heat of the fire and released it towards the living room. The oldest known panels date from the late 15th century - a period from which almost nothing else has survived from rural culture in this region. Reconstructed Taken installations can be found in the museum near the door from the Taken plate exhibition in the main building to the Rose Garden, in Haus Stein (building group "An der Güterhalle") and in the restaurant office. Taken slabs were placed in open fireplaces at the back to reflect heat. If they are rectangular, there is no difference between them and the Taken panels. Since, unlike those, the face is on the side of the fire, they show considerably more signs of erosion than the usually very well preserved Taken slabs. Kiln plates are similar to Taken plates in shape and manufacture, but the side plates have lobes on the edges which made it possible to wall the back of the plates, which were assembled to form a five-plate kiln, into the wall. 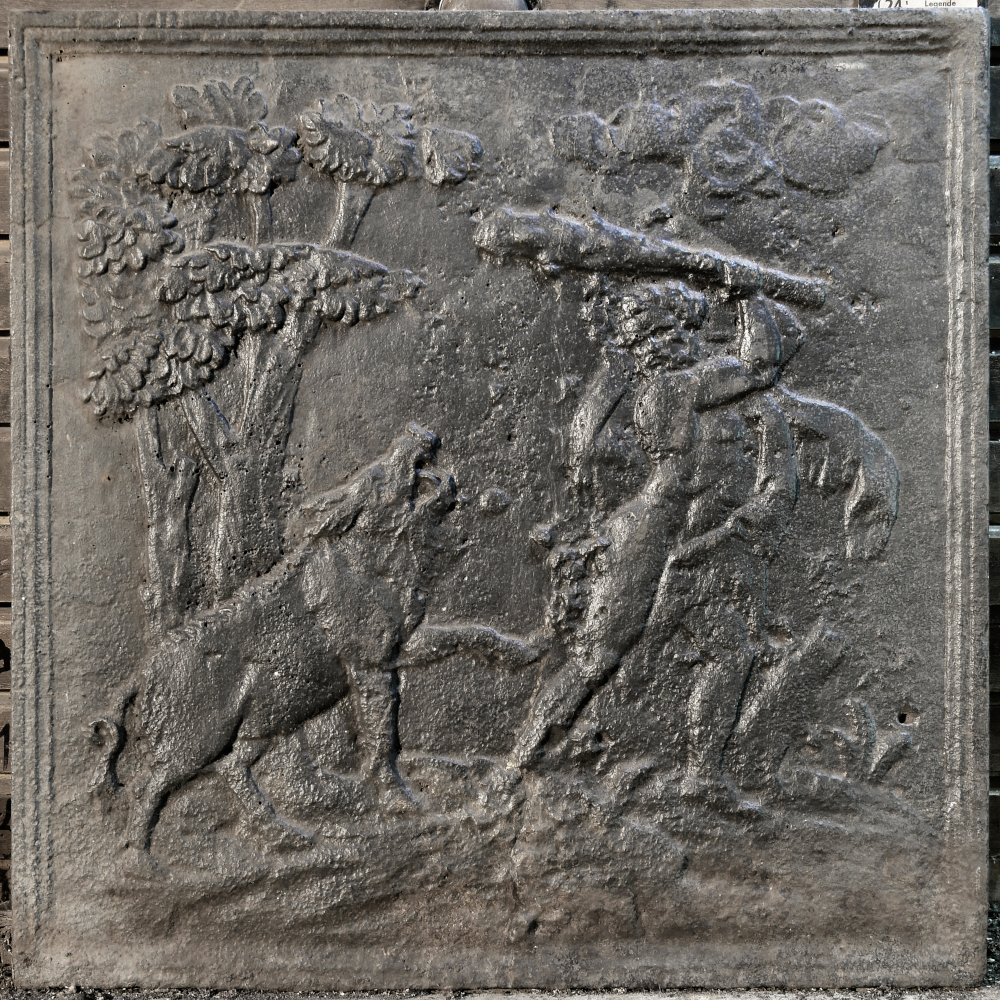 Oven slabs are similar in shape and manufacture to Taken slabs, but the side slabs have flaps on the edges that allowed the back of the slabs, which were assembled into a five-slab kiln, to be bricked into the wall. Both Taken and kiln plates usually have pictorial representations and mostly show biblical or heraldic motifs until the French Revolution, after that also mythological or allegorical representations. The widespread use of Biblical motifs in peasant estates suggests that the Taken plates also served there as a picture Bible, which "warmed up" the mostly illiterate people with Biblical stories. 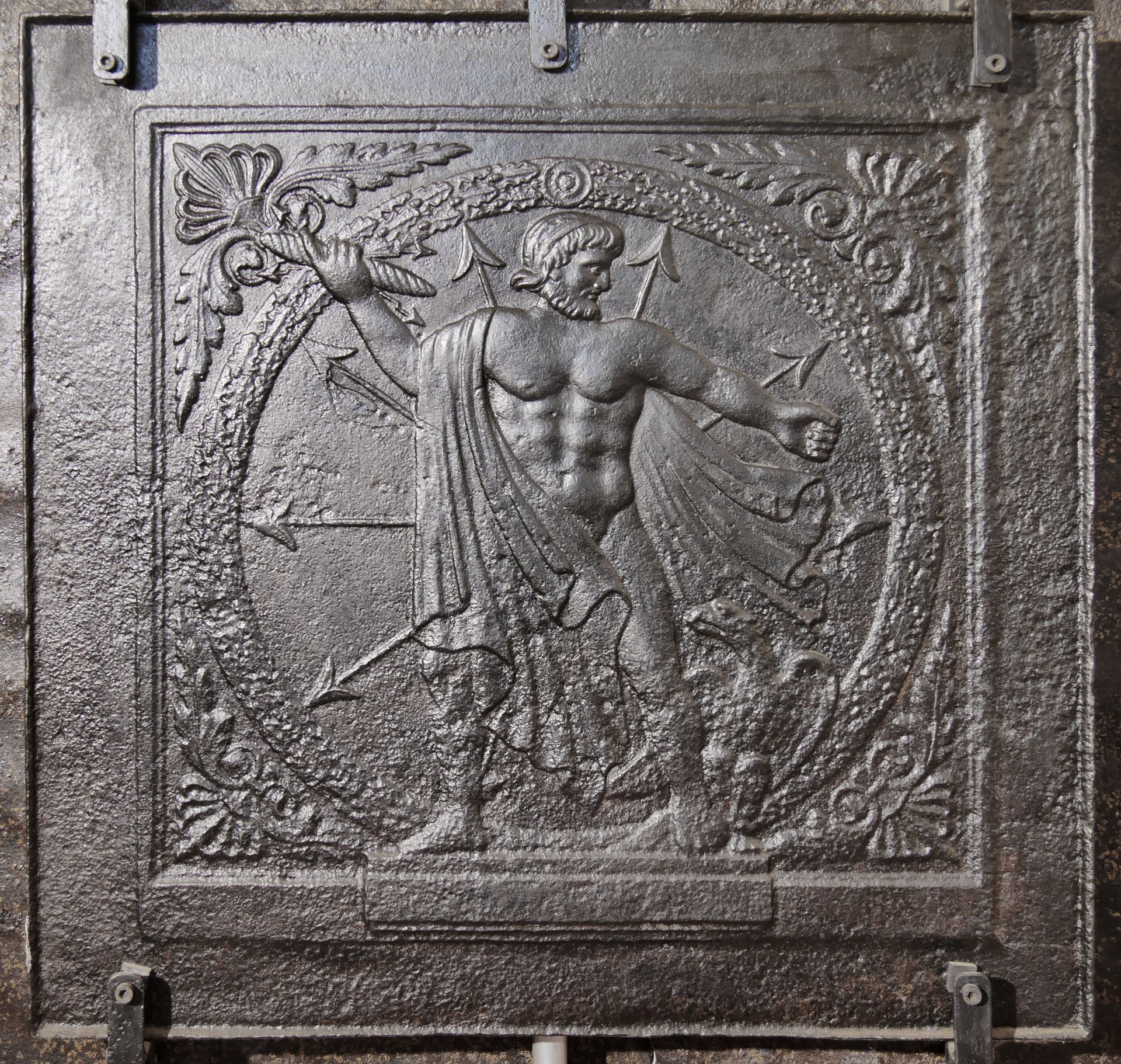 The phenomenon of Taken heating is confined to a narrow geographical framework. Taken plates were only produced in ironworks in eastern Belgium, Lorraine, Luxembourg, the Eifel, Hunsrück and what is now Saarland. The oldest known plates date from the late 15th century - a period from which nothing else has survived from rural culture.

The exhibition shows plates from various foundries. One focus is on the now vanished foundry in Quint (now a district of Trier) and the foundry in Weilerbach (now a district of Bollendorf an der Sauer), which is still in ruins. The exhibition uses many examples to explain the iconography of the plates for Catholic, Protestant and Jewish households and explains how they were made. More Taken plates hang in the museum restaurant. Reconstructed beacon installations can be found in the museum near the door from the beacon plate exhibition in the main building to the Rose Garden, in Haus Stein (building group "An der Güterhalle") and in the restaurant office. >> Digitising our cast iron plates at museum-digital< 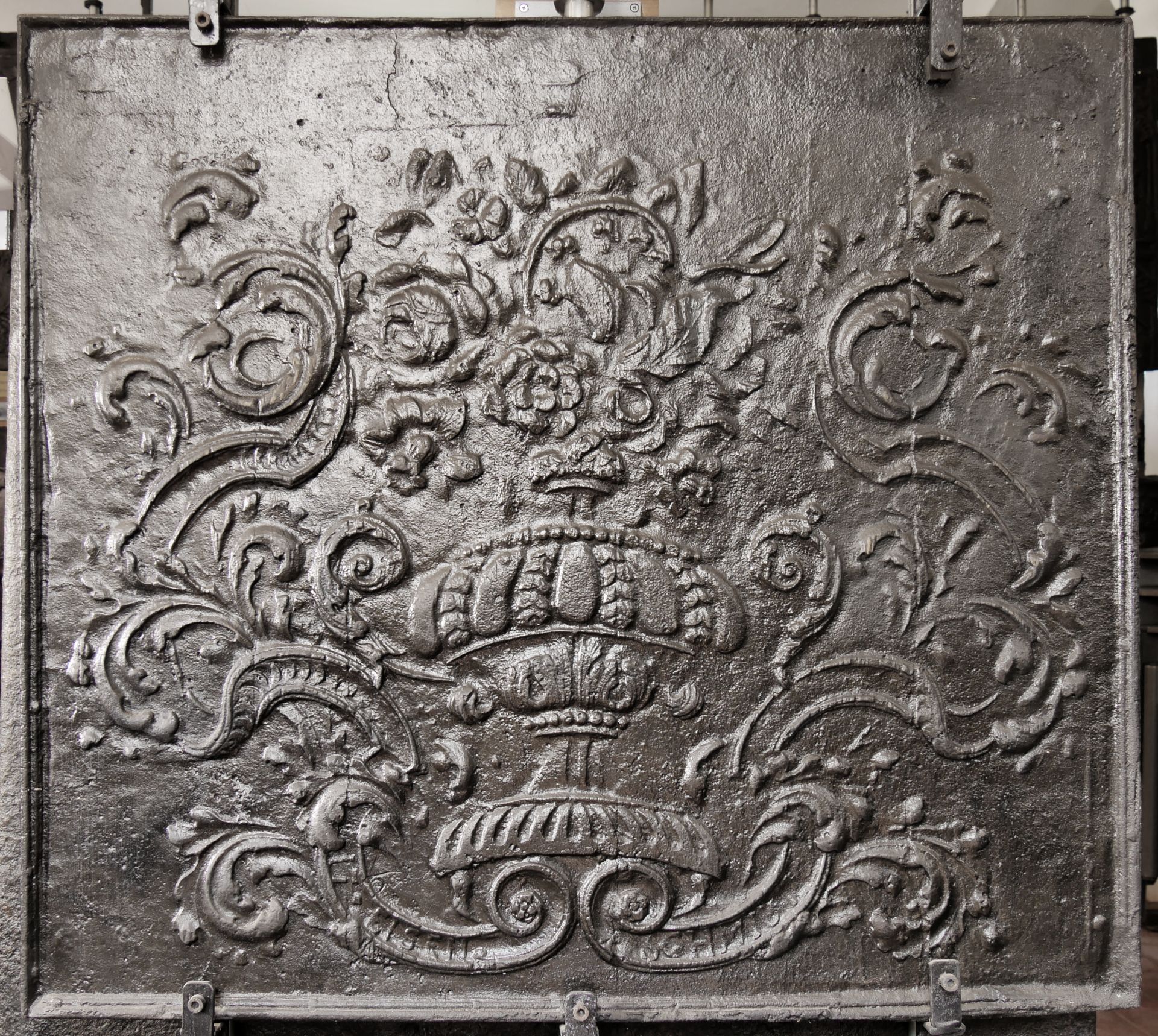 The collection of stoves ranges from often elaborately decorated cannon stoves of the Wilhelminian period to often colourful continuous-fire regulation stoves clad on the inside with fireclay - the last generation of stoves before they were displaced by central heating systems. The great variety of stove types, especially from the second half of the 19th century, is astonishing. In terms of technology, a distinction is made between stoves with and without a grate in the combustion chamber. The former were only suitable for firing wood. The latter had enough "draught" to burn coal, which was becoming increasingly important as a fuel. Continuous-burning stoves could be operated almost indefinitely by refilling the fuel at the top and disposing of the non-combustible residues in the ash drawer at the bottom.

In terms of construction, column kilns - from simple cannon kilns to specimens overgrown with ornaments - circulating kilns and filling regulation kilns can be distinguished. Rarer examples are luminous ovens, which radiate the light from the combustion chamber into the room, mantle ovens with a protective grid around the circular oven, smoking ovens, drying ovens, and very modern ovens to be operated with gas. Some ovens have the form of an open fireplace, others serve as an insert in such to operate it more economically. 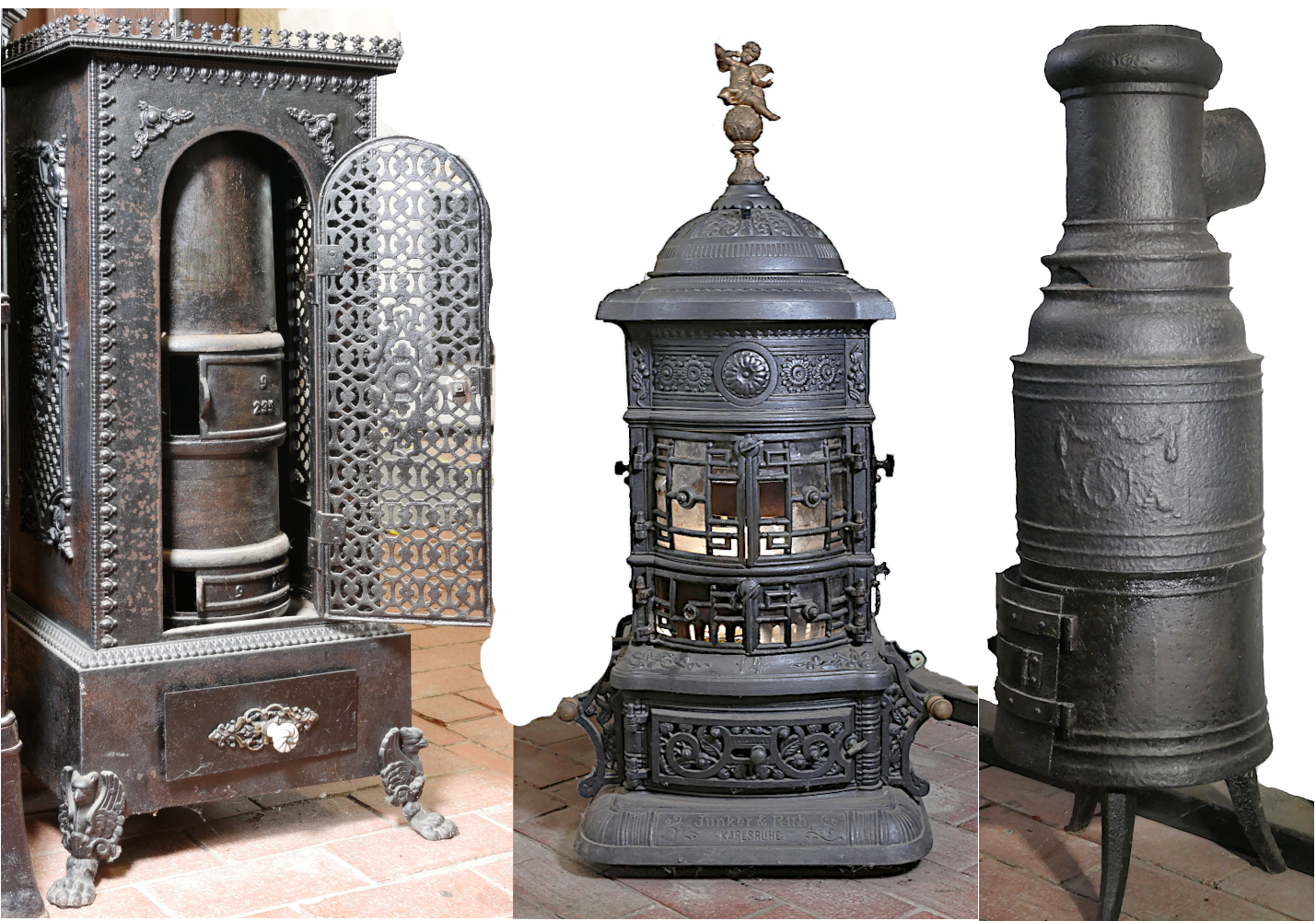 A very special exhibit is a workshop stove manufactured in large numbers by Carlshütte from Büdelsdorf near Rensburg, which - possibly as the only example of its type - survived the last decades unused in a concert gymnasium and came to the museum in 2020 shortly before its demolition. Kitchen stoves are on display ranging in size from those for a pauper's dwelling - often the only source of heat in it - to large restaurant stoves. Other stoves and ovens can be found in furnished houses in the museum villages. >> Digitizing our cast-iron stoves at museum-digital

Opening of the Takenplatten exhibition on March 20, 2005: speeches by Dr. Haas and Markus Zimmer-Berberich MA