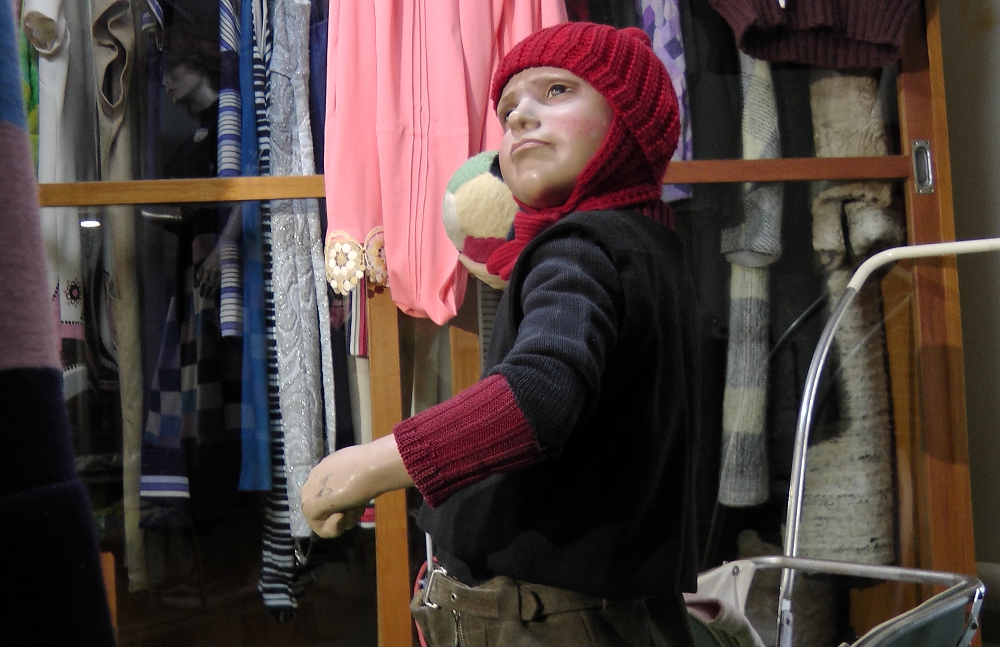 20th century trades (2):So many visitors enjoyed looking at life in earlier times as it has been shown in our first shop alley for 10 years that we decided to install another one in the upper floor of the east wing with a number of shops from a purchase of recently closed stores.

Thus, the demonstration of professional life

1. The office of an architect
Until not too long ago, the drawing board was the most important tool of an architect. Computer Aided Design (CAD) was not invented yet. Another very important difference between the building construction now and then is the use of contemporary decorative elements in earlier times. This style also applied to farm houses in rural environments as we can see by the construction of ledges at the Saargauhaus in the open-air site. Many old farm houses show elaborate decorative elements in the frames of the doors and windows like pilaster strips, diamond ashlars, adorned ledges etc. Even the peasant houses are decorated with unobtrusive elements, even if it is only the facade like in the case of our „Hunsrückhaus“ from Fronhofen. 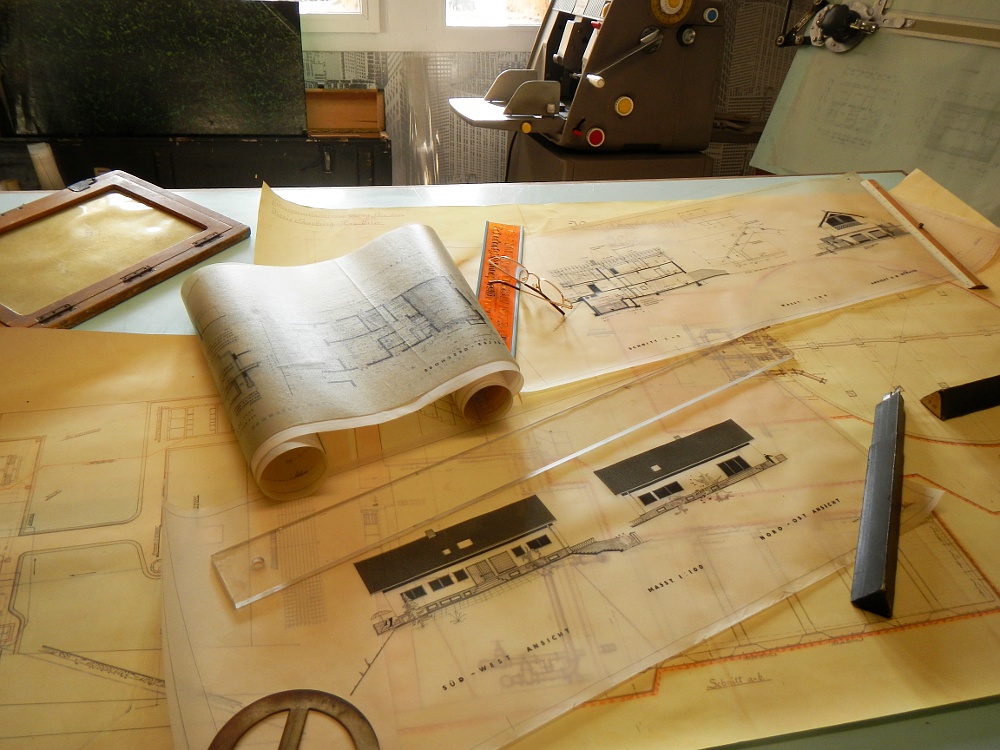 2. The consulting room of a physician
Nowadays there are over 30 physicians in Konz, many of whom are specialists. Two generations earlier, there were 4 or 5 physicians in Konz, who were responsible for the whole town and the surroundings. Furthermore they were responsible for everything from obstetrics to succor on the deathbed. The specialization and technical development of health care we have today did not exist then. The consulting room was set up in the physician’s private residence and by its furnishing and with the personal items creates the impression of a living room rather than a consulting room. The relationship between the doctor and the patient was also rather close due to this. An important tool for the work of a physician, the stethoscope, is turned in a funnel-shaped piece of wood. It is a gift from a physician from Konz. The collection of cupping glasses reminds us of old but maybe not too bad methods of treatment. 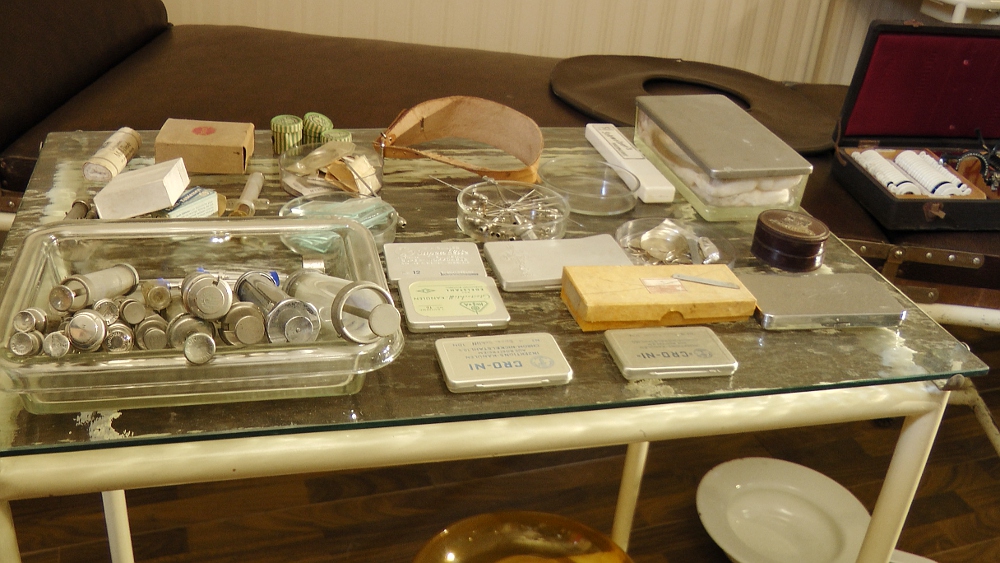 3. The hat shop „Hannappel" from Trier
At the horse races in Ascot we can still see them: the fantastic, fanciful headgears for women. Unfortunately, they vanished completely from our everyday life. This may have caused the family Hannappel to give up their business and donate it to our museum. Until two decades ago, women used to wear hats to different occasions and not only as a weather protection. Decorative hats were worn on festive occasions, for example churchgoing, special invitations etc. They were manufactured from different natural materials, like felt, leather, fur, straw, bast and rushes.To the mostly hemispheric headgear different brims were added, that were originally intended as a protection from rain and sun. For the decoration of the hats an endless range of accessories was manufactured into them: loops and ribbons, ruffles, natural or artificial flowers, peacock and ostrich feathers, gems, medals, pins etc. In the course of history, there were repeatedly times when wearing hats was not usual. Maybe the hats for women will come into vogue again one day. Until then we keep the memory of a time, when the ladies used to wear charming hats- 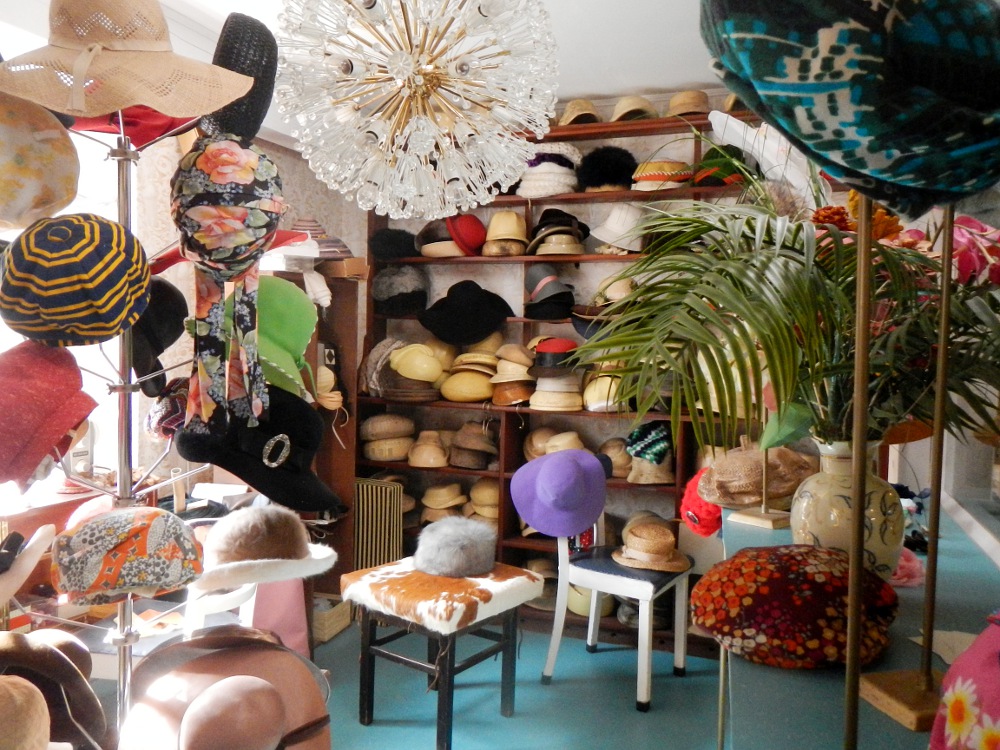 4. A bank from the Imperial Era
The desk from the end of the 19th century was the workplace of the banker. He knew all of his clients, their personal circumstances, their creditworthiness and their guarantees without a computer. The treasurer kept his cash in a steel cabinet. For the accounting of all ingoing and outgoing payments there was a special machine. The focus of his work were savings and small loans. The majority of the population considered having debts unusual or even defamatory. Current accounts and transactions were exceptional cases. Securities transactions were only performed if they were absolutely safe. 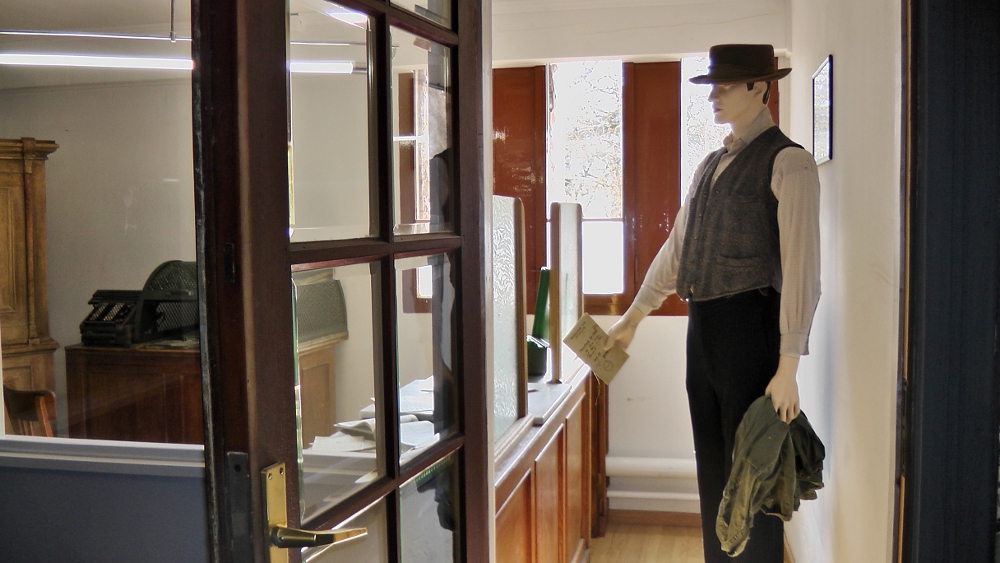 5. Shop for picture frames and devotional objects
The objects in this shop are from another donation of businessmen from Trier, the Stoffels family. Nowadays, framing pictures mostly is the job of art galleries and tinkerers, but our shop still shows a series of pictures, that were about to be framed or repaired. Lushly decorated picture frames are out of fashion today. Also the old molds, that were used for the baroque shapes and are still kept in a cabinet are no longer used today, just like the tools that were used for gold plating. Devotional objects don’t have the same importance to people as earlier. Figures of saints, crucifixes, stoups and figures of Jesus, Mary or angels are no longer in demand, neither are the beautiful figures for christmas cribs. One special feature of this shop is the cutting machine, that is used to manufacture the miter joints (by beveling the parts of the frame in order to create a rectangular connection). For the cutting of the pictures, cardboards and mounts this shop had a cutting machine, similar to the one in the bookbindery across. 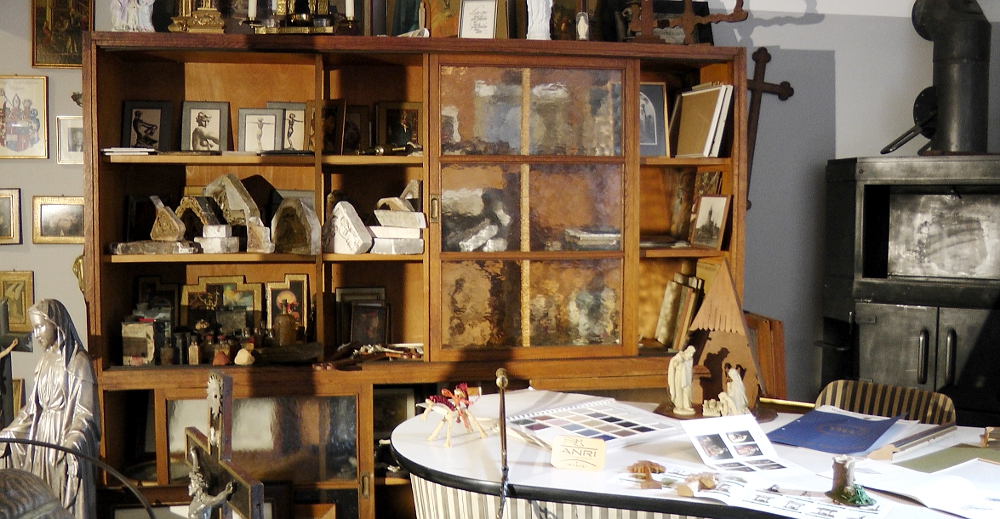 6. Plumber’s workshops
A plumber was found in every larger town at that time. Our workshop was assembled from parts of the workshops from Edmund Laubach and Felix Zock. The main tools are a three-roll bending machine and a folding machine. With these two machines, the plumber could shape pipes and crates and also create buckets, tubs, lamps and other metal products. For the construction of complex constructs he used the blanks on the right wall. Also, there were other tools for welding, soldering, riveting, drilling, flanging, grinding, deburring etc. Nowadays the job of a former plumber is split up into different specialized businesses, e.g. heating engineering, car bodywork, sanitary engineering and also roofing companies. 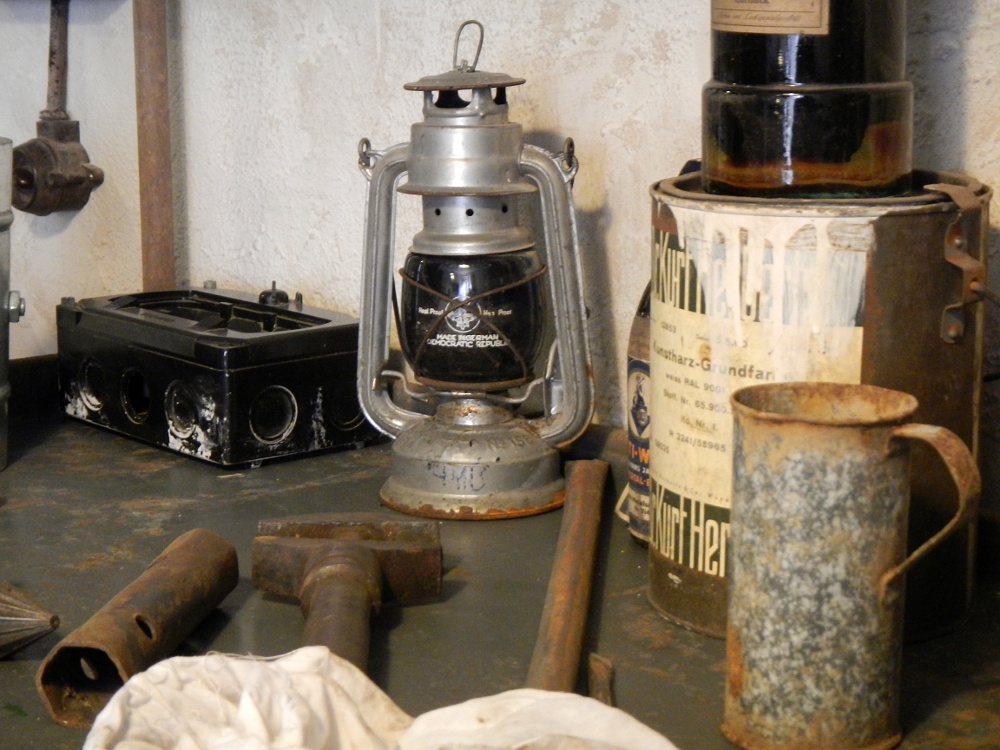 7. Herrmann’s hardware store
The store in the Karl-Marx-Straße in Trier sold everything you could possibly need for a long time. Special screws or screw nuts, door or window fittings, locks, handles, hooks, hinges, nails, rivets, threaded rods, kerosene lamps, fishing gear and also extraordinary things. In Trier everybody knew: „Herrmann has everything“. Besides, he could give you some advice. Today big construction markets dominate the market where you have to buy a pack of screws even if you only need one. 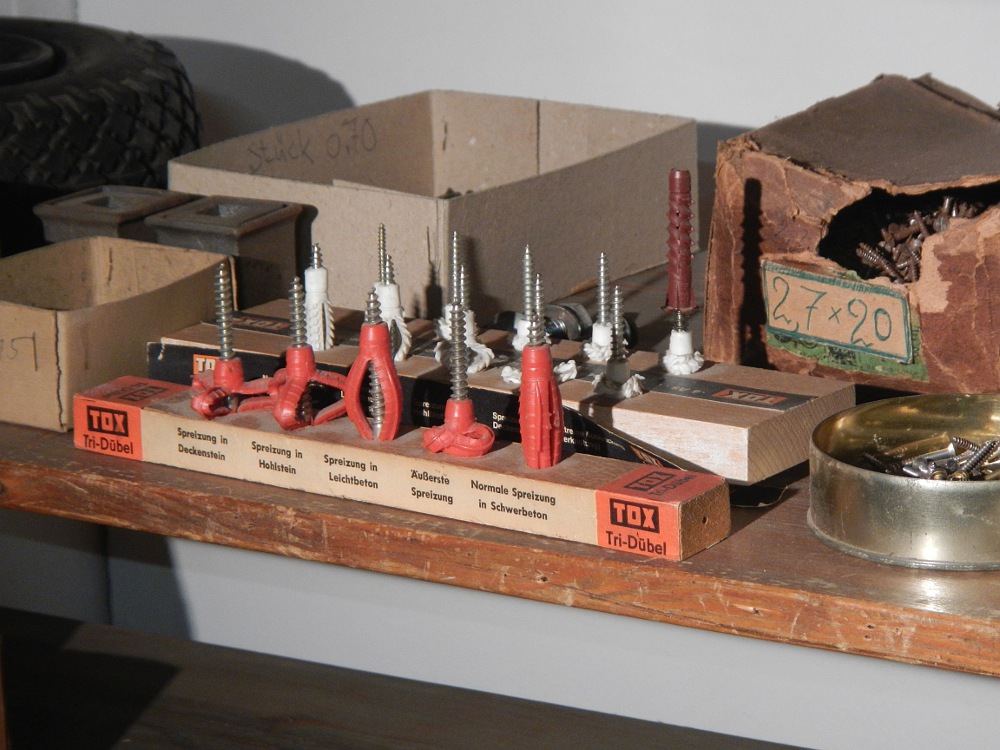 8. The bookbindery
Our small bookbindery is a collection of parts of workshops, that were given up a long time ago. Still it is typical for the last working bookbinderies in our region, that still practice the art of esthetic book design (e.g. leather binding, embossing, gilt edges). This book culture was far more common at that time than it is today. Parts of the special tools we owe Peter Reinwald from Konz, whose father practiced this craft into his old age. The basic tool of classic bookbinding and our workshop here is the sewing frame, that is used to sew the pages together. The squeezing machine and the cutting machine were also of crucial importance. Nowadays, most of the books are glued with dispersion adhesive, a process invented by Ernst Lumbeck in the thirties of the last century. This technique allows us to produce books cost-efficiently and in large quantities.

9. Hofer’s lamp manufactory
A typical example for the vanishing of special stores is the lamp and lampshade manufactory of Mister Hofer. He crafted lampshades individually for every customer. You can see how craft and art are closely connected. First, the material for the shade (silk/cotton fabric, lacquer foil or parchment) was attached to a soldered frame. Then the shade was fixated with heat resistant adhesive and embellished with colorful bordures. Another important part of the store was a variety of lamp accessories. We are grateful to the founder Mister Hofer, that we could save this workshop from vanishing. 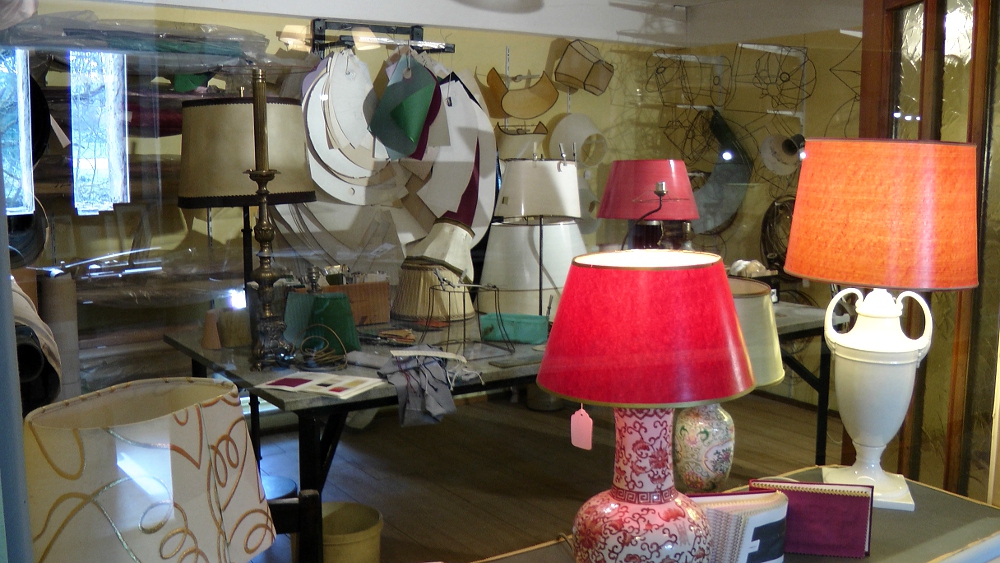 10. und 11. Women’s and men’s fashion stores
These two shops also show the change, that is in progress: Traditional specialized shops still exist, but they are forced out of the market by mail-order businesses like Neckermann, Quelle, Amazon and many more. Personal advice, fitting, taking a closer look and feeling the cloth is replaced by ordering everything to your home and free return. 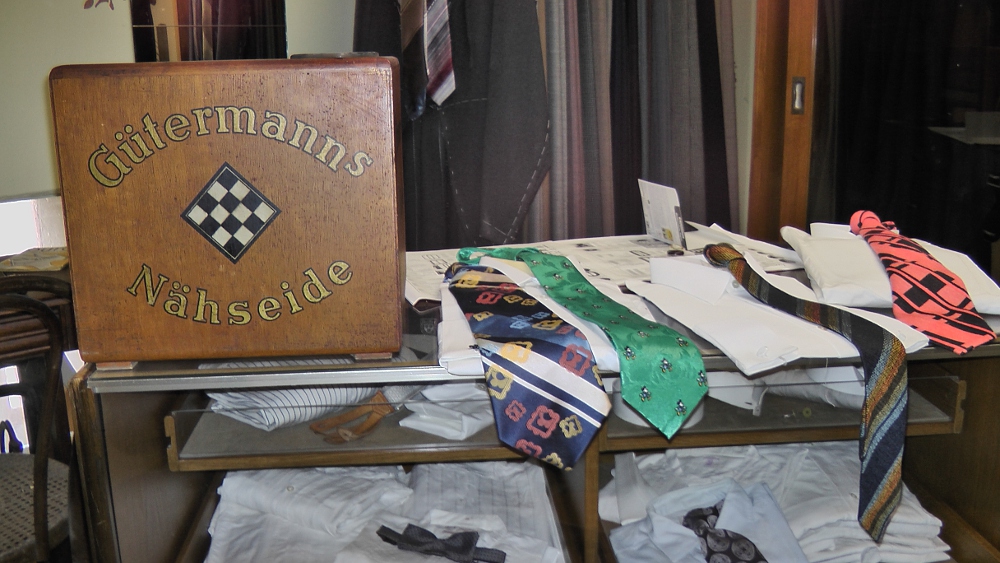 12. The radio shop
Radio broadcasting was developed after World War I. The first German broadcast including a music show is dated October 29, 1923. The monopoly position in entertainment of theaters, concert halls and cinemas was broken. As the popularity of this new medium grew, radio stations were built all over the world. The German Reich used this technology to spread its propaganda with the aid of cheap radio receivers. News, music and entertainment broadcasts expanded rapidly during the thirties and even more rapidly during the fifties. The technological progress and mass production led to a reduction in price for radio receivers. Soon they were found in almost every household and radio shops were opened everywhere. Later, transistor radios replaced the old devices, that had taken up much room especially when used in combination with record players or tape recorders. Transistor radios enabled the miniaturization and digitalization. After that, the Hi-Fi devices with even more complicated technology flooded the market. Instead of a radio as one piece of technology, for the first time receiver and stereo loudspeakers were split. Nowadays we can just download music from the „cloud“. This development is another example for the ongoing trend: specialized shops vanish and big electronics markets dominate the market with overwhelming advertising. 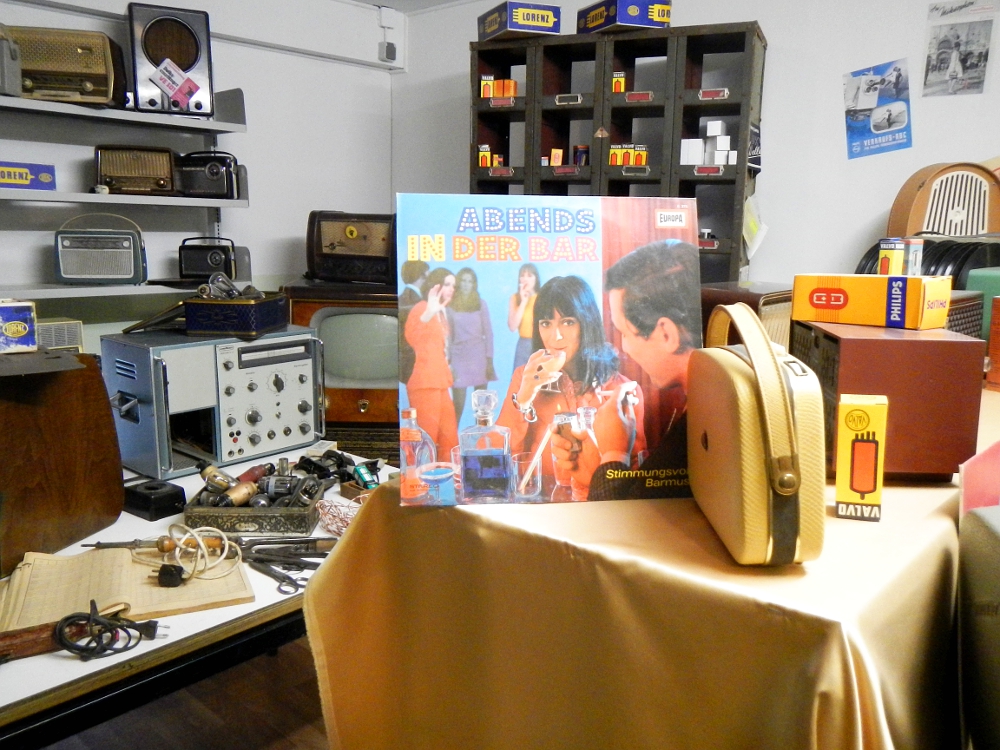