Back gardens from the Hunsrück 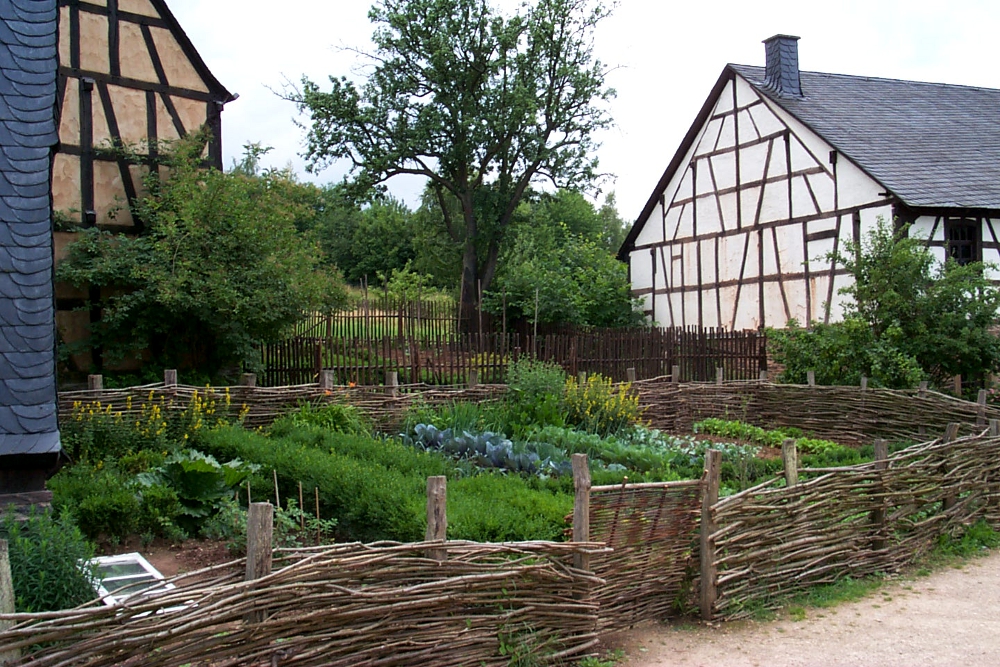 Next to the Molz house there are two back gardens from the houses from Bell (B 4) and Lieg (B 6). They are fenced in on one side by twisted hazel sticks and nailed fir wood on the other, to keep out grazing animals and chickens which roamed freely around the village. Wattle fences had been in use since the Middle Ages and were common up until the late 19th century. Neither nails nor wire were needed in order to make a garden fence like this.

The garden used to be not only for decoration but it represented a part of the owner's living space in the true sense of the word. It combined both practicality and beauty.

Its vegetables were vital basic nutrients and by growing medicinal plants such as elderberry (for feverish colds), arnica (for open wounds), peppermint and camomile (for digestive problems) it served as apothecary. In the summer months the colourful blooms were a delight for the eyes too.

The paths bordered with box divided the gardens into even beds. In the garden of the Bell house, which represents the late 19th century, the paths are scattered with tanning bark, that is to say with oak bark, the acid of which prevented growth of weeds. The garden paths of the less affluent shepherd's house from Lieg are covered in slate chips. This garden represents the late 1920s, which is why for example tomato plants can be found here, which were just becoming more common in farm gardens in the Hunsrück about this time.