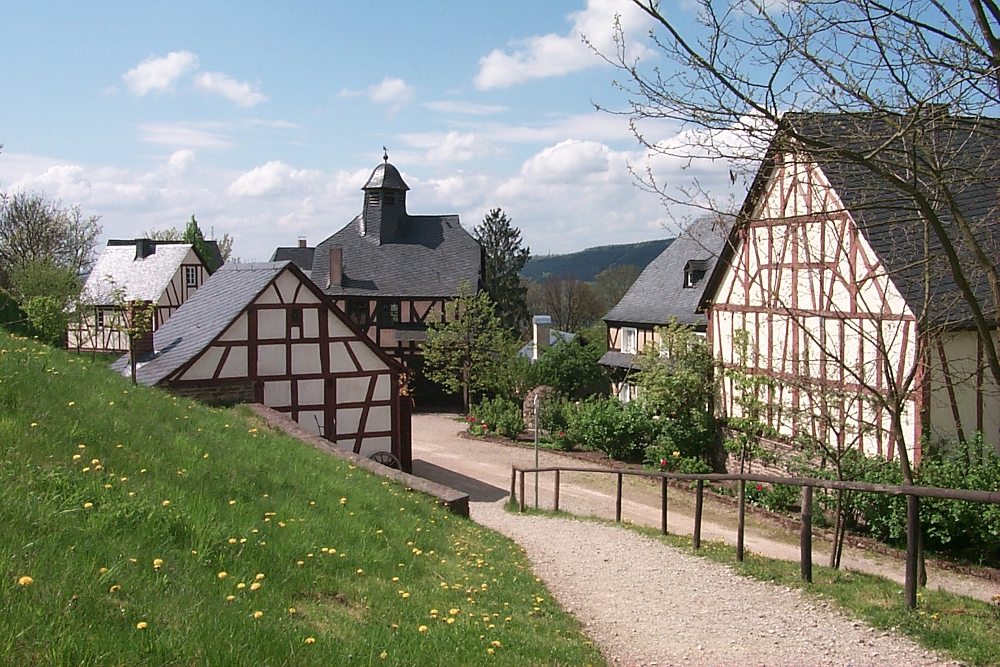 The Hunsrückweiler is the first museum village rebuilt by the open-air museum Roscheider Hof and the town hall was the first building translocated into the museum. The project was completed in 2008 with the opening of the school building in Würrich.

In addition to these two buildings, the Hunsrückweiler consists of a smithy, a barn, a bakery where bread can also be baked and several farmhouses representing the different social classes of a village. . 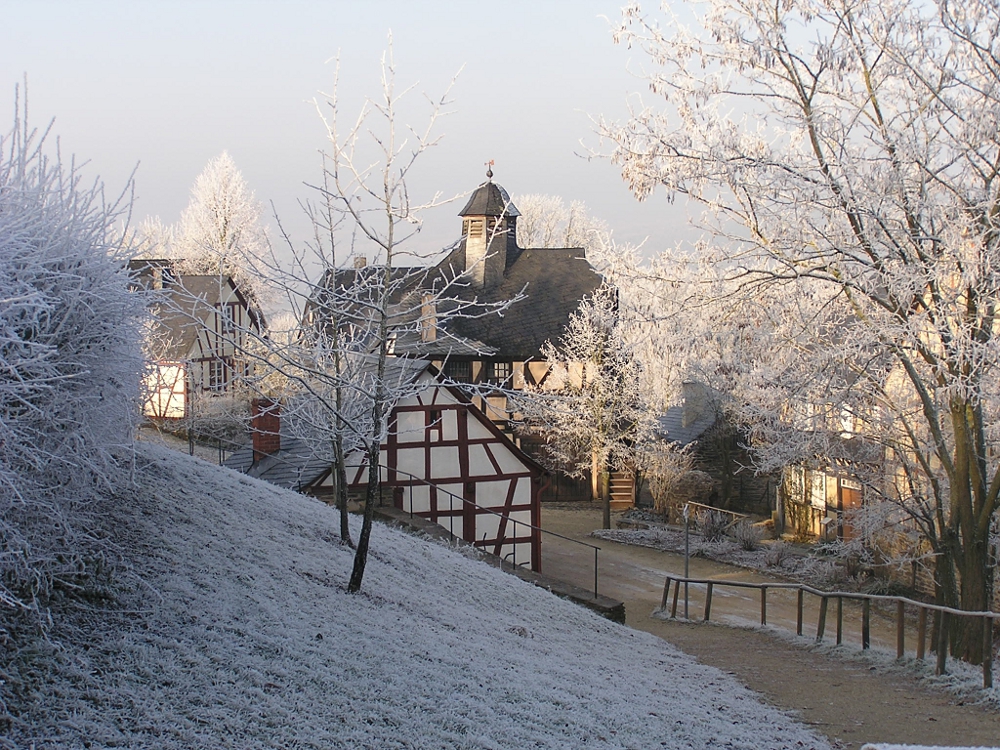 The former school house was dismantled in Würrich (Rhine-Hunsrück district) by the museum staff and is currently being reconstructed in the museum's Hunsrück village. The roofing ceremony was celebrated on the 14th May 2000.Clambour Pavillon

The building was dismantled in 1989 in the Hunsrück village by museum staff, reconstructed in loving detail in the museum grounds and re-opened in 1998. It is a building two rooms deep, typical for the Vorderhunsrück, and dates to around 1830. During extensive redesign in 1915 the original stunted hip roof, among other things, was removed with the result that the building gained its current characteristic appearance with a pitched roof.

The house was built in 1808 as the property of a rather affluent full-time farmer. It presents a two-storey half-timbered house, three rooms deep, the ground floor living quarters and livestock sheds of which are built from quarried slate.

Back gardens from the Hunsrück

Next to the Molz house there are two back gardens from the houses from Bell (B 4) and Lieg (B 6). They are fenced in on one side by twisted hazel sticks and nailed fir wood on the other, to keep out grazing animals and chickens which roamed freely around the village. Wattle fences had been in use since the Middle Ages and were common up until the late 19th century. Neither nails nor wire were needed in order to make a garden fence like this.

Read more: Back gardens from the Hunsrück

This farmhouse from Bell was built around 1820 and has the typical appearance of a Hunsrück house. It was designed as a two-storey half-timbered house, two rooms deep, and the entire living quarters are covered on the outside with natural slate.

The Bosselstube (handicrafts room) is a type of farm outbuilding, which was often built in the 19th century in the Hunsrück. On the ground floor, which is built entirely of quarried slate, there was a pigsty.

This type of building, combining the functions of livestock shed and barn under one roof, was very commonplace in the Hunsrück until a few years ago. They usually came into being as a result of stabling cattle in the mid 19th century. The characteristic barn doors are often still seen in many Hunsrück villages today.

The Schug house or also "Schuche house", as it was called, is a half-timbered house with a floorplan two rooms deep. This means that between the entrance on the weather side and the opposite facing eaves there were two rooms.

The parish hall from Gödenroth

The Gödenroth parish hall was the first building to be reconstructed in the open air museum. It was first built in 1749 as a single storey shepherd's house for the Hunsrück village of Gödenroth. By 1792 the parish already needed to extend it by one floor to use as the parish hall. It was given a stunted hip roof with a ridge. This is where the bell to summon the parish councillors to meetings was installed. The covered steps leading up to the meeting room were built on the outside on the gable end. This meant anyone spying at the door was clearly visible.

The bake house from Oberkleinich

During the winter months of 1997/98 the bake house from Oberkleinich in the Bernkastel-Wittlich district was reconstructed in the open air museum. This is a small single storey house built with quarried slate. The inside has only one room, a third of which is taken up by the oven at the back. Originally it belonged to five cooperative bakers, who built it themselves in 1932.