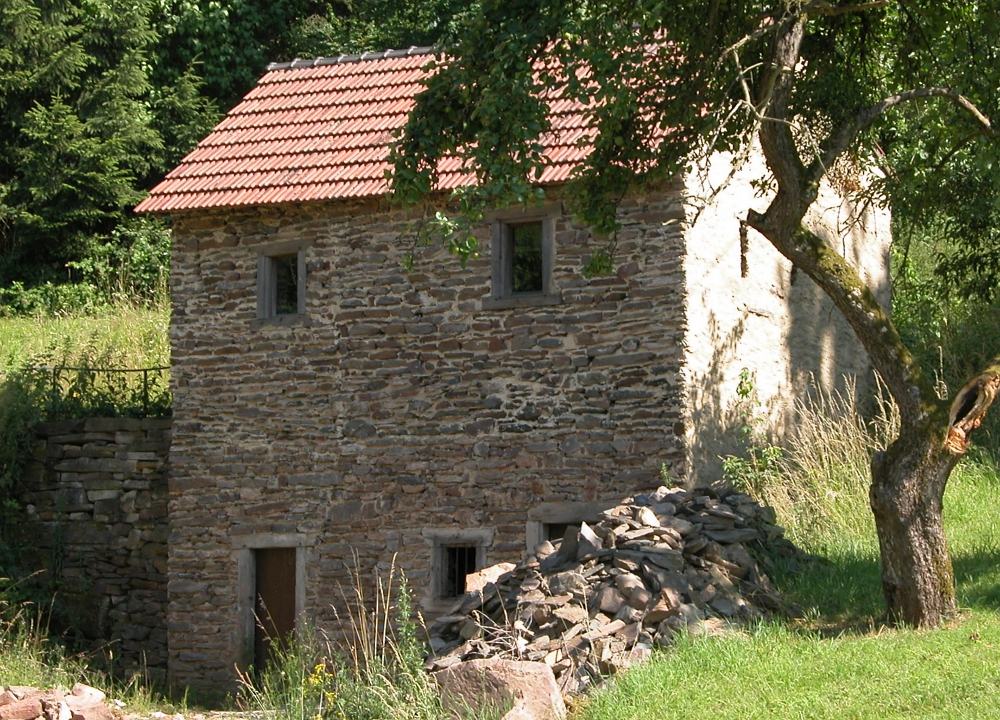 The first floor which could be reached via a steep side entrance was probably originally used as a workshop, but was sometimes used as a bedroom and later as a chicken coop. The reconstruction of this house started in 2000.

The pictures on the left hand show the building being dismantled at its original location.

The Schu-Schmitten house is a farm outbuilding such is often found in our area. Schu-Schmitten is the name of the house which dates back to the early 19th century.

The house has two doors on the ground floor leading into the vaulted cellars, which have a beaten earth floor. The cellar vaults, probably built over a natural stone surface, had undoubtedly always been used as storerooms for potatoes, beets and the like. The cider barrel also had its place here. The purpose of the third vault, which was only discovered when the building was dismantled and is at the side of the left-hand cellar, has not been completely clarified yet. What is remarkable is that it extended onto the neighbours' property and that it may have continued on further. When the house was dismantled the entrance only caught our notice as it was walled up in a different way. This vault probably served as a secret cellar, as a hiding place for food and other valuable things in times of hardship. We know quite a lot about the house and what it was used for from the father of the house's last owner, Mr Hermann Zimmer: In the early 19th century the 1st floor, which can be reached from up on the slope through a door on the left, served as a bedroom for the family's four sons. Rumour has it they later emigrated to America. When the first floor was no longer used for sleeping, a workshop was set up there. From time to time a large loom made from thick oak timbers was erected there too.

The walls of the house have been built with thick slate rubble that we brought over here. Any missing stones have been replaced from old vineyard walls. The house had been only partly plastered. The door and window jambs are made of oak. The year the house was built, 1784, can be seen on the lintel over the right-hand door. The year the house was built can also be confirmed by the ring-dating of the timbers carried out since. 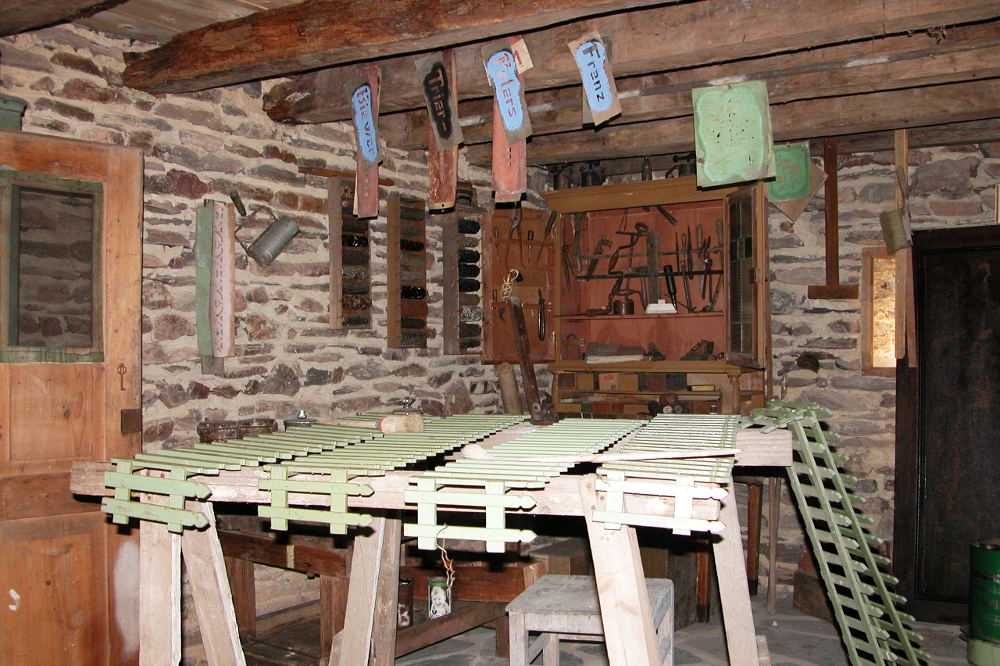 There is a small sandstone set in above the lintel where a small arrow pointing upwards can be identified. This is a house marking common in Oberemmel, which is still in evidence in today's "rosary", the chain for drawing lots that plays an important role in distributing the individual felling areas in the peasant communal forest (Gehöferschaftswald).

The roof, of which only the purlins and rafters are to be seen now, was originally thatched with straw. After a fire in the neighbouring building in 1858 it was then covered with a hard roof of Pfalz tiles from Merzig which was retained when it was reassembled.